The Rock ‘n’ Roll Hall of Fame is located in Cleveland mostly because of a man who wasn’t a singer or a musician. His name was Alan Freed, and he was a disc jockey who in the early 1950s had a late-night show on Cleveland radio station WJW playing rhythm and blues music. It was a show oriented to teenagers that used a lot of jive talk that included a relatively new phrase for most white teens: rock ‘n’ roll.

Freed didn’t invent the phrase, but he popularized it. However, one could say he did invent the rock ‘n’ roll concert because to showcase the new music he hosted a live show in 1952 called The Moondog Coronation Ball. An unbelievable 20,000 teens showed up, and the police, fearing a riot, panicked. The concert barely got through one song before it was shut down by local authorities.

To pay homage to Freed I traveled to the Lakeview Cemetery in Cleveland, but I had to work to find him. Check out the list of famous people buried there and you’ll get a president, industrial magnates, even a famous detective, but not the disc jockey. Nevertheless, his gravesite is marked by a distinctive black stone that stands almost 6 feet tall. A jukebox is carved on the back of the stone, and on the front is etched the picture of a very young Freed before the travails of being a cultural pioneer wore him down. He died in 1965 at 44.

Underneath the picture is a brief history of the man, delineating him as having a key role in the creation of rock ‘n’ roll. Indeed, the hyperbolic intro to the Freed legend on the stone begins with these words: “Rock ‘n’ roll was born in Cleveland when Ohio native and radio disc jockey Alan Freed coined the phrase in 1951.” Not quite accurate, but good enough. At the base of the tombstone are small rocks left by visitors to honor Freed in the Jewish tradition.

I was walking away from that stone when I noticed a relatively recent burial with a plaque that included a picture of a very wacky-looking gentleman playing a guitar. The name on the plaque read “Glenn W. Schwartz.” The name sounded familiar so I looked him up and realized he was a member of the rock band called The James Gang, which was formed in Cleveland. An alumnus from the band, Joe Walsh, went on to play with The Eagles.

A stone’s throw away there is another small tombstone with these words: “Life’s about women, cigs and being creative.” What makes this gravesite unique is that visitors plant colored pens before it as if it were some weird, surrealistic garden. The man buried here is Harvey Pekar, who was a pioneering underground comic artist. His book “American Splendor” helped usher in today’s graphic novels.

Ironically, Harvey’s neighbor here is none other than the most famous crime fighter in the annals of American law enforcement, Elliot Ness of “The Untouchables” fame. He was the prohibition agent who went after Al Capone and was able to bring him to justice. His exploits have been so popularized that a television show and a movie have been produced about him, both called “The Untouchables.”

Leaving the artistic for other more mundane pursuits, I followed the marked road through the cemetery to a more hilly section, dense with big monuments and old trees. The white obelisk made from the largest single chunk of white granite east of the Mississippi marks the grave of John D. Rockefeller, once considered the richest man in America. When petroleum became king he was the king of petroleum, from the start of the industry in the late 1800s through a breakup of his monopoly that created ExxonMobil and Chevron among many other well-known companies to his death in 1937. Many of his family and descendants are buried near the obelisk in the family plot.

Having said all that, perhaps the grandest gravesite marker in the United States is a short walk, up a path to an immense multistory monument called the James A. Garfield Memorial.

President Garfield was assassinated in 1881, but the memorial wasn’t finished until 1890. It was designed by architect George Keller in the Gothic-Romanesque style. A recent review of the memorial called it a “masterpiece of design.” While I simply recognized a fine sculpture of the president in the hallowed hall, the writer observed: “In the building’s Victorian interior, a vast domed rotunda is supported by red granite columns. Colored light glitters into the space, which resembles the apse of a cathedral.”

Garfield and his wife lie in an underground chamber. They are not buried but entombed in their bronze caskets. An American flag drapes the president’s casket.

Lakeview Cemetery is located east of downtown Cleveland. The drive time from the Rock ‘n’ Roll Hall of Fame is 15 minutes. 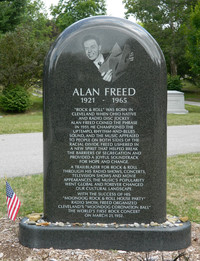 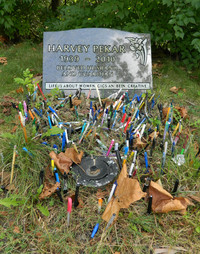 Fans of cartoonist Harvey Pekar use colored pens to decorate his burial spot at the Lakeview Cemetery in Cleveland, Ohio. Photo courtesy of Steve Bergsman. 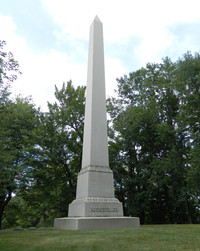 A white obelisk marks the grave of John D. Rockefeller at the Lakeview Cemetery in Cleveland, Ohio. Photo courtesy of Steve Bergsman.

Greek travellers turning their wanderlust into a lifelong adventure, even after having kids

Travel: Walk in the footsteps of Outlander with new Lallybroch and show landmark tours

Travelling for 261 days around China on an electric motorcycle, Lifestyle...