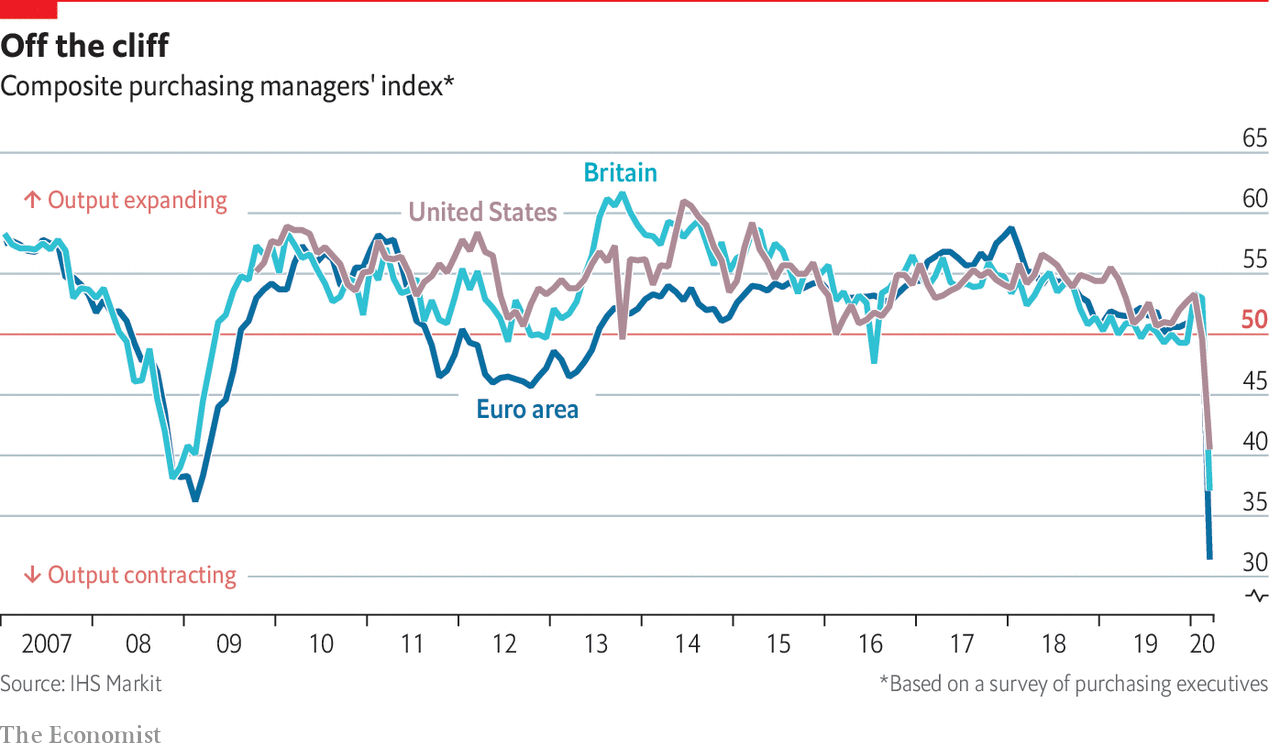 FIRST, PEOPLE stopped travelling; then they gave up eating out. Now, all over the world, governments are telling them to stay at home. Over the past few weeks, a deep recession has come to be accepted as the inevitable economic price of slowing the advance of covid-19. On March 24th some of the earliest broad statistical indicators of how deep that recession might be in Western economies arrived, in the monthly purchasing managers’ indices (PMIs) published by IHS Markit, a data and research firm. The numbers are staggeringly bad: they presage a recession every bit as bad as in the financial crisis of 2007-09, and probably worse.

The PMIs are compiled from surveys of purchasing managers at 400 companies in each of several countries. They cover manufacturing, services, construction and the whole economy. Managers are asked about a host of things: current and future activity, new orders, employment, suppliers’ delivery times and more. They provide a pretty decent leading indicator of GDP. For each index and sub-index, the magic number is 50: a figure above that suggests that activity is increasing; anything below it points to contraction.

March’s PMI numbers were expected to be awful—as they had been in China a month before. And so they were, particularly in the euro area; and especially for services, which were hit early and hard, as travel, tourism and visits to restaurants dried up (see charts). In the euro zone, the overall, or composite, index plunged to 31.4, from 51.6 in February. That is the lowest since the index was created in 1998. The services index slumped from 52.6 to 28.4, beating the previous dire record of 39.2, set in February 2009, by a distance. Service-sector jobs were cut at the fastest rate since May 2009.

Manufacturing, which was already shrinking in the euro zone, didn’t escape: its index slid from 48.7 to 39.5. In fact, notes Bert Colijn of ING, a Dutch bank, the manufacturing figure was pushed up by longer supplier delivery times. Normally that is a sign of strength; now it signals disruption.

Britain’s figures weren’t as bad, but wretched all the same; and the country is a few weeks behind continental Europe both in the number of cases of the virus and in its restrictions on daily life. Only on March 23rd did the prime minister announce a near-total lockdown, and the survey was conducted from March 12th to 20th.

In America, the drop was less severe than in Europe: from 49.6 to 40.5 overall. Manufacturing slipped from 50.7 to 49.2, implying only a slight contraction. Yet that is nonetheless the sharpest drop since August 2009. And the survey also contained evidence that covid-19 has halted America’s remarkable run of job creation, in which its unemployment rate had declined to just 3.5% in February. IHS Markit reports that companies shed workers at their fastest pace since December 2009, partly because of a fall in outstanding business, as customers put orders on hold.

How this translates into a decline in GDP is hard to say. Chris Williamson, chief economist at IHS Markit, notes that the March numbers are roughly consistent with a fall in American GDP of 5%, at an annualised rate, and around 2% quarter-on-quarter (ie, faster still) in the euro area. But with such a sharp fall, extrapolating from past relationships is hard. And March is only the beginning. Economists are already predicting far, far steeper falls in second-quarter GDP.

Could the coronavirus stop the eyesight of the European Task?

Coronavirus travel advice – what to do if your holiday is...