When my husband and I decided to visit Egypt he was interested in the country’s history and I couldn’t wait to see the art. As it turned out, the two are inextricably linked — the history gave rise to the art and the art would help us to understand the country’s rich past.

Once there we visited temples whose walls and columns were covered with hieroglyphics, museums filled with statuary, and tombs alive with color because their paintings had so long been underground and out of the light. At the first temple I was overwhelmed by carvings that covered every inch, but I soon learned that every mark had a meaning and that once I knew a few principles they were within my power to decipher.

A hieroglyph (meaning “sacred carving”) is a character in ancient Egyptian writing that depicts a thing or action, expresses a sound and clarifies the characters around it. These are often collected into a cartouche — an oval with a straight line at a right angle at one end — to tell who is being honored by the edifice and indicate that they were royal.

Scenes in these places represent everyday life events and humanize the people, who were all seen as equals, despite the figures in crowns and carved more deeply being royal. People with disabilities were not discriminated against in real life or in art. In fact, such infirmities were considered gifts from the gods. We learned this at the Egyptian Museum in Cairo, where my favorite sculpture, titled simply “Man and Woman,” depicts a happy couple who seem totally unaffected by the man’s condition.

On tomb and temple walls we saw pictures of everything from a simple meal to battles to preparing a dead body for the next life. If a woman is kneeling among other women she is giving birth. If anyone else is kneeling he or she is a servant. If he’s wearing the mask of a jackal he is a priest. If a man’s beard is straight he was alive when his statue was created; curved ones appear in the tombs.

Sobek, always represented as a crocodile, was the god of the Nile who brought fertility. The sun god Ra is a falcon. The right eye of Ra symbolizes protection and good health, while the left eye of Horus offers many of the same properties. A figure’s vandalized nose means his or her enemies have sought to deny the person breath and thus an afterlife. This is especially noticeable at Hatshepsut’s temple in Luxor, where the angry stepson who succeeded her destroyed most of her effigies.

Objects also have specific meanings. Scarabs and baboons are symbolic of the sunrise. The ankh is emblematic of everlasting life.

Much of the color on temples has faded, but inside the burial chambers in the Valley of the Kings and Valley of the Queens it is pristine and almost indescribable in its beauty. Beyond looking pretty, however, the colors also have meaning.

Early Egyptian artists relied on mixing pigments from minerals and plants with ground stones, egg yolk and water to produce the colors in their palettes. The word for “color” could mean either character or appearance, and how these shades were used was symbolic and well-regulated. Green stood for growth and regeneration, and women’s skin was white or pale yellow while men’s was a shade of brown. Black represented the fertile land along the Nile, and white had several meanings: purity, cleanliness and simplicity. It was used for priests’ sandals as well as for tools and sacred animals. Red stood for the desert, since that’s where the pigment was gathered, as well as chaos and blood. Blue represented the heavens. In several tombs we visited the ceilings were bright blue and spangled with gold stars since silver was the more precious metal in those days.

Color pairings also had meaning. Silver and gold represented the moon and the sun and green and black the various stages of the life cycle. Where figures are pictured in a line their skin tones alternate between dark and light. Kings were depicted in blue with gold leaf, and red ochre was the color of common people’s skin.

The ancient Greeks, led by Alexander the Great, built the temples during their stay in Egypt, which began in the seventh century B.C. This explains the plethora of columns in the temples’ hypostyle areas. Especially in the southern part of the country some of the columns look like bundles of papyrus since it grows abundantly in the Nile marshes there. Our group made a stop at the Luxor Papyrus Institute, where we watched how the plants are turned into a substrate for writing and painting. We were also able to see — and purchase — works of art by Egyptian painters.

At Cairo’s Museum of Islamic Art we wandered through rooms filled with colorful designs in wood, glass, ceramic, jewelry and textiles. Since the faith does not allow for depictions of Allah, we saw instead incomparable tiles, fountains, saddles, lamps and vessels for use in mosques.

But not all of Egypt’s art took place in the time of the pharaohs. Our group also discovered more contemporary artists, such as sculptor Mahmoud Mokhtar, painter Mahmoud Sa’id, surrealist Ramses Younan and feminist painter and activist Inji Efflatoun — modern all but still influenced by the art of their ancestors.

In order to see and learn about everything Egypt has to offer, a guide is an absolute must. Google “tours of Egypt” and you’ll find many at several different price points. We decided on Smithsonian Journeys and recommend them highly: www.smithsonianjourneys.org. 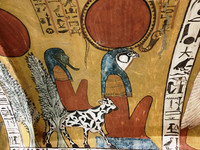 The colors in the burial tombs in Egypt’s Valley of the Kings and Valley of the Queens have been naturally preserved because no light has been able to reach them. Photo courtesy of Phil Allen. 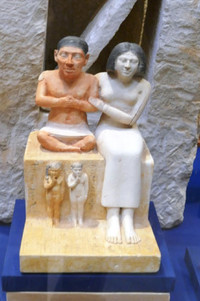 The “Man and Woman” sculpture resides in the Egyptian Museum in Cairo. Photo courtesy of Phil Allen. 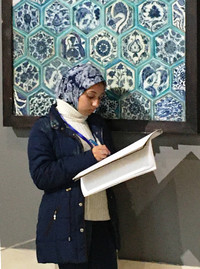 A student works in the Museum of Islamic Art in Cairo, Egypt. Photo courtesy of Phil Allen.

The colors in the burial tombs in Egypt’s Valley of the Kings and Valley of the Queens have been naturally preserved because no light has been able to reach them. Photo courtesy of Phil Allen.

The Journey of Elaina Episode 2: Release Date, Preview and much...