When Jesse Curry and his family arrived in Lima, Peru, on March 13, the Florida native said life in the South American city seemed impervious to the novel coronavirus without a mask in sight. When they woke up on March 15, that all changed.

That Sunday, Peru’s president, Martin Vizcarra, issued a 15-day nationwide state of emergency and abruptly closed the borders to halt the spread of the novel virus, leaving thousands of foreign tourists stranded in the country.

International border closures and travel restrictions have left more than 13,000 Americans stranded in foreign countries across the world, the Hill reported. Since the early days of the outbreak, the State Department has repatriated more than 5,000 US citizens from 17 countries.

US travelers stuck in Peru and India told Business Insider the US embassies have not been forthcoming, and the little information they have received is vague, outdated, or even wrong.

But some US embassy employees have pointed the finger at the State Department. One foreign service officer told CNN that “every embassy is just making it up as we go along” because the agency hasn’t given them better guidance.

“The State Department is rising to meet the historic challenge posed by the COVID-19 pandemic, every day, all over the world,” a spokesperson for the State Department told Business Insider. “The State has never before undertaken an evacuation effort of such geographic breadth, scale, and complexity in its more than 230-year history.”

Left to their own devices, Curry and about 2,500 other Americans citizens stranded in Peru have resorted to organizing and creating their own information networks online.

Americans stuck abroad say the US embassies have been no help 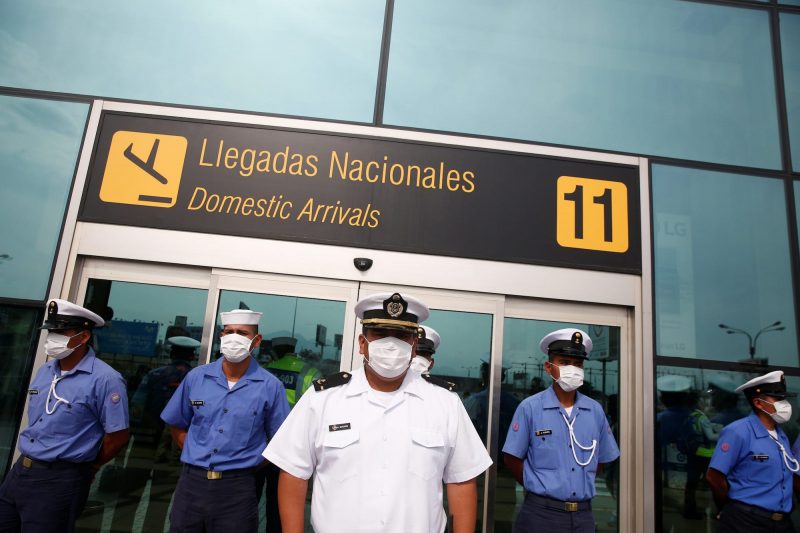 Foto: Sailors with the Peruvian Navy stand guard outside Jorge Chavez International Airport after the Peruvian government closed the country’s borders in response to the outbreak of the coronavirus disease (COVID-19), in Lima, Peru March 17, 2020. Source: REUTERS/Sebastian Castaneda

Curry, who works as a software developer, told Business Insider that he first discovered that foreign tourists were rushing to fly home before the borders shut on March 16. He immediately reached out to the US Embassy in Lima to see how his family, including his mother, wife, and two children, could get home to Tampa, Florida. With only a vague auto-reply message, he called its emergency line to no avail.

“Since then, the communication from them has been extremely limited and the information is often outdated if not just completely wrong,” Curry said. “Right now the US embassy is closed as far as I can tell. Nobody’s really answering at all.”

New Yorker Eliana Ojeda and her four-year-old son came to visit family in Peru and are now stuck at her aunt’s house.

“I only speak for myself, but the USA embassy in Lima sucks. You can’t do anything through the phone, only by email, and it took days for a response,” Ojeda told Business Insider.

An American living at the center of the coronavirus outbreak in Wuhan, China, expressed nearly identical frustrations with the US embassy’s lack of communication in the early days of the outbreak.

In the absence of the US embassy, Americans citizens stranded in the country began organizing on WhatsApp and in a Facebook group called “Americans Stuck in Peru” to take stock of how many were stuck in the country and share updates. Americans have also created Facebook groups in other countries, including Ecuador and India.

Peter Barbot, a 29-year-old scuba diving instructor stranded in New Delhi, India, said he contacted the US embassy about India’s ban on all international flights to the country, but also received little information and vague, uninformative messages. So he also started an “Americans Stuck in India” Facebook group.

Curry said he’s helped other Americans in Peru find pharmacies to fill prescriptions, sign up for the STEP service online, and register for the US-organized flight when the site kept crashing on mobile devices. STEP is a service the State Department offers to keep Americans informed of travel advisories when they’re in other countries.

Although the embassy now sends daily updates to those enrolled in the STEP program, Curry and others say there is still no clear answer on when they will be able to return home.

“If you look at the flights that people have been able to book that have later been canceled, it really paints a picture that we could be here indefinitely,” Curry said. “The communication from the State Department is not helping that at all.” 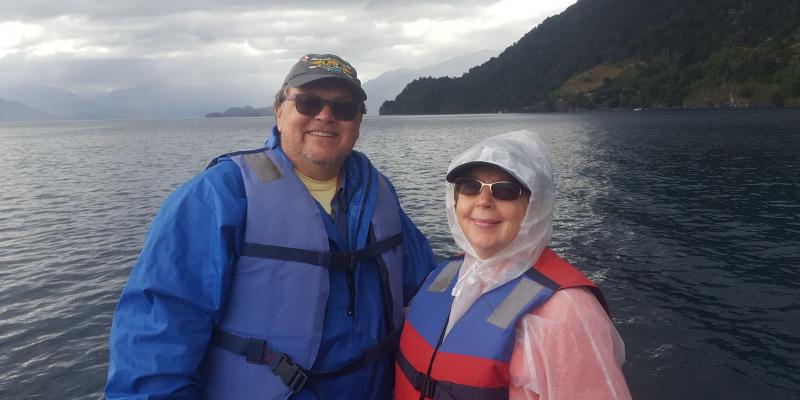 Foto: Michael Goins and his wife Anne have been traveling across South America and are now stranded in Cusco, Peru. Source: Courtesy of Michael Goins

Michael and Anne Goins were ready to board a bus tour of Machu Picchu the day the country’s borders closed.

Instead of exploring the Incan ruins, the husband and wife from North Carolina headed straight to Cusco, Peru, to try to catch a plane back to the United States – and after 2.5 hours of waiting, they were 20 people away from getting on the last plane out.

The 65-year-old optometrist said he’s also had difficulty getting in touch with the staff at the American embassy. But Goins came to the State Department’s defense, suggesting the real problem was “pushy” Americans.

“We’ve all tried to reach out to them – they’re short-staffed because they’ve evacuated [essential employees]” Michael told Business Insider. “I’m a little frustrated with the people that piss and moan. We live in an instantaneous society and everyone wants this stuff done yesterday. This isn’t how it works. Everything takes time.”

Although Goins had faith that the federal government would find a way to repatriate its citizens, he expressed anxiety about Anne running out of her medication, which is unavailable in the country. His private practice and his employees in Wilmington, North Carolina, also hang in the balance with Michael well-past his allotted vacation time.

“This was a dream trip for us,” Michael said. “But we’d like to get home now.”

The first US evacuation flights out of Peru left the country nearly a week after the country abruptly closed its borders, including medically vulnerable citizens and Peace Corps members.

President Donald Trump, Vice President Mike Pence, and State Department officials made conflicting statements about organizing military transport to evacuate citizens in Peru, but the US ultimately decided not to send military aircraft on Saturday, the Wall Street Journal reported.

We didn’t need you to “track”this,we needed you to solve this

On March 24, Sen. Marco Rubio of Florida announced that a “competent official” was being sent to Peru to take over evacuation operations after he complained to the federal agency that “the Ambassador essentially abandoned the post to return to Washington,” the Hill reported. 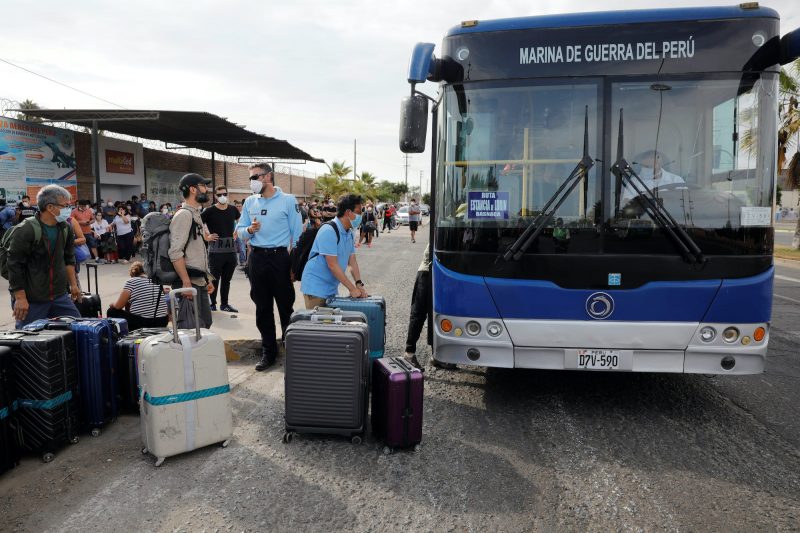 Foto: French and Japanese stranded in Peru take a bus at the military airport to catch a flight, prior to the curfew ordered by the Peruvian government to contain the outbreak of the coronavirus disease (COVID-19), in Lima, Peru March 22, 2020. Source: REUTERS/Sebastian Castaneda

Airlines have canceled thousands of flights as the coronavirus has wreaked havoc on the travel industry. At least 55 global airlines have completely stopped flying scheduled flights due to travel bans, airspace closures, and low demand for travel.

That means, in many cases, the US government evacuating its citizens could be some people’s best hope right now.

Curry and other Americans received an email that the US was working on getting flights for citizens if they register for them. Despite registering his family almost immediately, Curry said he has yet to receive any confirmation or when his family could get a flight back home.

While he and his family remain fairly comfortable, another citizen from Missouri, Zoe Parham, told Business Insider she and a friend hitched rides and rode buses from a small rural town to get back to Cusco or Lima so they could try and make a flight home. But her flight and many others were canceled without notice after Peru tightened travel restrictions.

Ojeda said she was told Americans had to sign a waiver agreeing to pay the US back for their evacuation flights home. Meanwhile, scammers have preyed on the desperation to leave the country offering fake private charter flights out of Peru that often don’t exist.

“We ask [the US] for help, but they charge us for the flight for more then $800 per person,” Ojeda said. “We are trying to survive in a country that is not even ours, but then we need to pay the US to take us back home.”

The State Department didn’t immediately respond to a request for comment on charging citizens for flights home.

The agency was able to bring home more than 1,000 Americans in Morocco five days after the country also abruptly closed its border on March 15, The Hill reported. A military charter evacuated the US women’s football team in Honduras, but hundreds of Americans are still in the country.

“The State Department has continued vigorously to prosecute its historic mission to bring Americans home from hard-to-reach areas and cities hardest-hit by the virus,” a spokesperson for the State Department told Business Insider.

The agency said it’s done what it can in the mass hysteria prompted by the novel virus, but that wasn’t comforting to Curry, whose family is still stuck in Peru.

“I think that the State Department’s response thus far I would categorize as criminally incompetent,” he said. “I don’t think that I could see any way to handle a situation like this any worse.”

COVID-19: ‘People have to be responsible for themselves’: Eight U.S. states still not locked down

COVID-19: ‘People have to be responsible for themselves’: Eight U.S. states still not locked...

Migrant workers and international students stuck in Australia due to coronavirus...

COVID-19: ‘People have to be responsible for themselves’: Eight U.S. states...

We asked our readers when they would feel safe going back...

Not all Airlines are on board with rules to get federal...